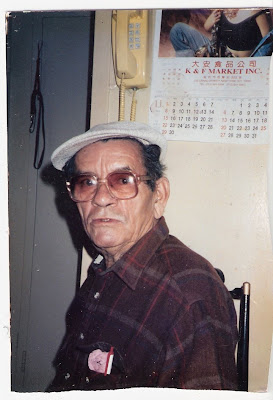 It is my hope that everyone had a wonderful Thanksgiving celebration and are looking forward to the Christmas Holiday Season. I would like to be the first to wish all of you, a Merry Christmas and a A Happy, Healthy, and a Prosperous New Year (2009). It has been a while since I posted anything on my blog.
The last post as you all know was about my friend and dojo brother Kyoshi Earl Monroe R.I.P. On Thursday the morning of August 21st, before I received that phone call about Earl, I had gotten a phone call from my twin sister Haydie that my father Juan Roldan (5/16/24 - 8/21/08) had stop breathing and had passed. My lord took him home. I dropped what I was doing and went to my fathers house on Madison Street on the Lower East Side of Manhattan to be with my sisters, brothers and the members of my family. We buried my father alongside my mother Justina Roldan Garcia at the Pine Lawn Cemetery on Long Island. Some friends, martial artists, and well wishers attended the Wake at Peter Jarema Funeral Home across the street from the Nisei Goju Hombu Dojo on seventh street. The reason I did not post this information during that time was that I wanted it to be of a private nature, thank you for understanding. The photo above is my father Juan Roldan, who was eightyfour at the end of his life here on earth and the begining of his after life in the bossom of my lord. I will always miss him, as he was my first teacher and mentor.
After the school term ended June 28, 2008, I retired from my job with the NYC Department of Education after twenty eight years of teaching physical and health education at the high school level. I thank the my lord for having given the opportunity to work as an physical educator and martial arts educator for my people in the city. During my career I met a lot of wonderful teachers and students alike. Every once and a while, I would be stop by former students who thanked me for the work I did with them. Those who thanked me were successes in their own right. I once met a former student at JFK Airport. who after becoming a dancer, was on tour of the United States' major cities. I have a few of students, including two brothers from the high school at the dojo training and moving up the rank structure of Nisei Goju. One day, if they do the work hard and persevere, they will reach the coveted Black Belt. I wish them luck. Now, I spend most of my time training and teaching the martial arts to the next generation of true Nisei Goju Black Belts.
Thank you for allowing me to share my memories of my father with you in celebration of his life, as well as, my life as a educator. I know look forward to working on this blog in the future with new information about Nisei Goju and its members in good standing.

Posted by Wilfredo Roldan at 9:46 AM No comments: