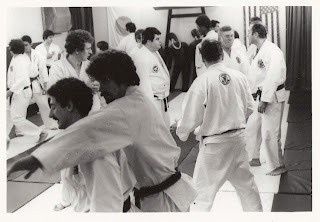 Sundays at the SAMURAI JU JITSU HOMBU DOJO was rough to say the least. No nonsense training Samurai Ju Jitsu is a hard core ju jitsu style founded be Pete Siringano I. In the forefront of the photo I am getting ready to be thrown by one of my dojo brothers.
One day at these classes, the grand master ask for a volunteer. I was the first to get up. He turn and said "No Ro, I want you to see this one". I said, I would like to feel it before I see it. No soon as my mouth uttered that last word of that statement, I felt my body levitating towards the wall. Lighting speed I did not see where his hand came from but felt his fingers disappearing in my chest cavity. It was a spear hand.
In the photo's background you can see Grand Master Siringano (gray sideburns) on the mat giving Sensei Vince Patalano (center) pointers on the techniques. Click on photo to enlarge it.
Don't Forget the BENEFIT MEMORIAL FOR MUHAMMAD SALAHUDDEEN AND THE UNIVERSITY OF THE STREETS. Sunday, JANUARY 27, 2008 3:00 pm until

Posted by Wilfredo Roldan at 6:30 PM No comments: 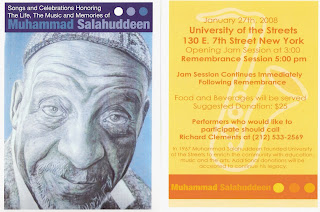 Muhammad Salahuddeen (1930 - 2007) was the founder of the UNIVERSITY of the STREETS. A place where youth of the community would come to learn basic electricity, plumbing, and carpentry to prepare themselves to go into construction or other fields. Most of the students in the program also received their High School Diplomas. The university offers classes in music in the form of vocal workshops, musical instrument instruction, music theory, art, jam sessions and of course martial arts.
I am very proud to say that Muhammad was one of my teachers of life and Islam. Happy to be here since the begining, I've seen the growth of many people , myself included, at the university. Muhammad's dedication to the University of the Streets was evidence of the institution's relationship with the community. I am happy to continue the legacy here at the U.O.T.S. and its open door policy. The Nisei Goju Hombu Dojo heads their martial arts department offering classes in Tai Chi Chuan Yang Style,Tai Chi Sword, Nisei Go Ju Karate, Ju Jit su, and Nisei Arnis Jitsu. We continue with our duty to the University of the Streets.

*On Saturday January 27, 2008, The University of the Streets and I invite you to a Benefit Memorial for Muhammad and University of the Streets. It's going to be a blast. Starting at 3pm- until with musical selections by performing artists from all over. Great food, drinks, and music will be served, AWESOME. I'll be one of the hosts of the event. I hope you can make it. Help us continue keeping the legacy of Muhammad's Dream, THE UNIVERSITY OF THE STREETS ALIVE.

Muhammad Salahuddeen will be missed by the many lives that he has touched.


*Click on image to enlarge it.
Posted by Wilfredo Roldan at 2:59 PM No comments: 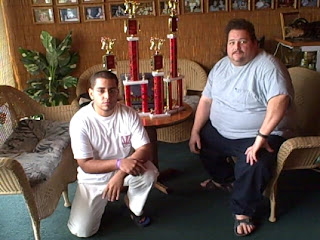 Renshi Kevin Fookes's student did their jobs as Nisei men. Milton Pinto Jr. and Dennis Carrier are in picture with their trophies. Milton took first place in kata and kumite. Dennis took second in both kata and kumite. Renshi Fookes is very proud of his student, as he should be. I am very proud of the work Kevin is doing for NISE GOJU, Keep up the good work Kevin. Here at the hombu dojo, we have seen many of the video you posted on you tube. Thank you for your work.
Milton and Dennis, your guys keep pushing on.
I am told about your workouts and hearing good things about you guys. Like I said, Keep on Trucking. Looking forward to hearing more about your development. Peace to all. Congratulations on your Victories. You make Nisei Goju proud.
Posted by Wilfredo Roldan at 10:51 AM No comments: