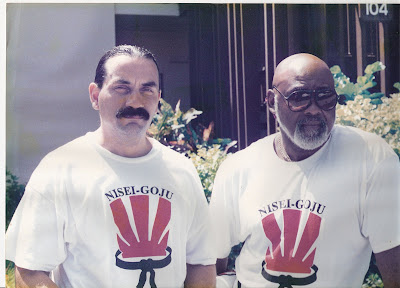 It is with deep sorrow that I inform you of the passing Earl Monroe (5/9/37 - 8/19/08).
On the 21 of August, 2008, I received a call about the passing of Kyoshi Monroe. Earl Monroe, Kyoshi was a pillar and icon of the Nisei Goju Ryu System.
Grandmaster Ruiz used to call him Earl "The Pearl of Karate" Monroe.
Before his karate days, Earl Monroe received his black in judo while stationed in West Germany during his time serving his country in the U.S. Army. Continuing his martial art education in Ju Jitsu at the Yudan Shi kai with Theodore West. He also trained some with Antonio Periera(Miyama Ryu Ju Jitsu) and Florendo Visitaticion(Vee Jitsu Ryu Ju Jitsu). Dedicating his life to the martial arts, he climbed the rank structure and gained the level of San Dan 3 degree black belt.
In the mid sixties, he began his training in Nisei Goju's founder Frank Ruiz. Kyoshi Monroe fell in love with the Goju system and was proficient practitioner. His years of dedication saw him attain the level of Ruku Dan, six degree black belt master teacher. He produced a number of black blacks in the Bronx and Westchester to his credit. He was also one of the heavy hitters of Nisei, as well as, a national karate champion. He was one of my martials arts inspirations, Thanks Earl.
The first time I met Master Monroe, we were both green belt in goju. I traveled to the Westchester School of Judo and Ju Jitsu to take part in the class given by then Sensei Frank Ruiz, Yodan Renshi. The class bowed in for a vigorous and brutal work out. The Classes always ended with Jiu Kumite (soft free fighting), that was really Go (hard) Kumite. I Finally Squared off with then karate green belt Earl Monroe. Something always told me, this was no ordinary green belt. A great fighter, he was known for his sweep and reverse punch combination. As we exchange techniques, I spun around and hit the side of his head with a hook kick. I thought I broke my foot. Being a Taurus, he was a bull and was also known as Mr. Reverse Punch. In that first sparring session, my suspicions were made real. Before I knew it, he swept me off my and I was looking up at the ceiling wondering , What the $%%$?. How I avoided the punch, I'll never know. After the class, I walked into the front office to say good bye to my new dojo brother, when Grand Master Ruiz, reintroduced me to Earl Monroe. It was that day that I was reintroduced to Earl Monroe, Ju Jitsu Sensei. I jumped to attention gave proper courtesy in the goju traditional manner USO!!!
I personally believe that I am a better man for knowing Kyoshi Monroe. He was and will always be remembers as my big brother and inspiration of the martial arts.
Rest in peace my big brother, your service to your parents and the martial arts were exemplary. Please have a moment of silence in your home or dojo for this Pillar of Nisei Goju, EARL MONROE,KYOSHI.
Photo above. Me and Earl in the United States Virgin Island of St. Croix. Click on image to Enlarge.
Posted by Wilfredo Roldan at 1:41 PM 1 comment: