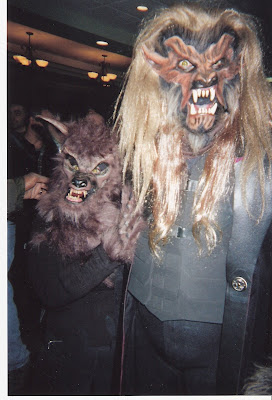 It was a great pleasure meeting Mr. and Mrs. Wolf. I don't remember the names of those in costumes, but I had a great time with them at the Sci-Fi Convention MONSTERMANIA. Of all the costumes The wolf's was very realistic and could scare the pants of some people.

Make-up artists, actors, vendors, autograph seeker and the like attended this event. At one particular time at the center was very crowded. It was hard moving around. Never the less, everyone seemed be having a wonderful time.

Check out the pictures below. I think they will lead you to the next Monster Mania.

Posted by Wilfredo Roldan at 11:23 AM No comments:

Here I am with the two Stars of the Sci-Fi Thriller - THEY LIVE, Keith David and Roddy Piper. I am the guy in the middle.
THEY LIVE featured the longest fight scene in movie history(mentioned in earlier post). It even made the GUINNESS WORLD BOOK OF RECORD. An awesome achievement by any standard.
Roddy Piper is a former wrestling champion turned actor. Behind him are photos of his fighting and filming sessions.
Both Keith and Roddy are men respected in the field that they are in.
I enjoy the time spent with them. It was really exciting.
Posted by Wilfredo Roldan at 2:36 PM 1 comment:

Here Freddy Kruger of NIGHTMARE ON ELM STREET fame decided to join Keith David, the SPAWN, and W. Roldan for a photo-op. Freddy's the guy on your right. How I got to MONSTER MANIA? Later on, I'll tell you about it. Mean while, enjoy the pictures.
I tried recommending a dermotologist to Freddy but he said I was the one with the skin condition. Who am I to argue. No NIGHTMARES for me on ELMS street.
SPAWN was just being his mysterious self. Keith is all smiles.

Posted by Wilfredo Roldan at 2:06 PM No comments:

In the begining of March I received a call from my friend and student Josh Silver. He invited me to accompany him and Keith David, a prominent actor/performing artist, to a Sci-Fi Convention at the Crown Plaza in Cherry Hill, New Jersey close to Philidelphia. I've never been to a Convention like this. It was awesome!!!
A couple of days prior to the event, Josh called me and told me he was not going to be able to attend the convention. He hurt his back and had to stay in bed for more than a couple of days. It turn out to be a work weekend because of Josh's injury. We missed him at the convention. It was a pleasure to work with Keith David. Keith David is a film and stage actor, singer, and performer. A number of actors I know call him an actor's actor. One of the greatest comnpliments one could achieve in the arts. Keith has many films to his credit: They Live with Roddy Piper, filming the longest fight scene in cinematic history, The Thing with Kurt Russel, Fast Feet on Broadway, Crash, Something about Mary Etc, Etc. I could go on. Above in the photo are Keith David, THE SPAWN, and yours truely. Keith Did the voice over for the HBO Series THE SPAWN.
The event was called MONSTER MANIA 2008. It was a horror fan's heaven. Keith Sign autographs for fans. It was exciting to see the enthusiam of the fans. People of all ages enjoyed the event. It was the first time Keith David saw a action figure of charactor he portrayed in the movie "Platoon". There were people in monster costumes, vender and other famous actor and actresses like Tom Waits (Star: THE WARRIORS) and Jobeth Willlaims (Star: POLTERGEIST).
I had a preview of the convention site's booths and fasinating displays. That was fun. I spent the rest of the time working with Keith David and the many fans that attended MONSTER MANIA.
I met some great people on this trip and learned alot. It was a pleasure working with Keith at the convention. By the time I got home, I was exhausted and went to sleep with great memories. That's what life is about. Stay safe, sound, and never lose the kid inside of you.
Posted by Wilfredo Roldan at 7:27 PM No comments: