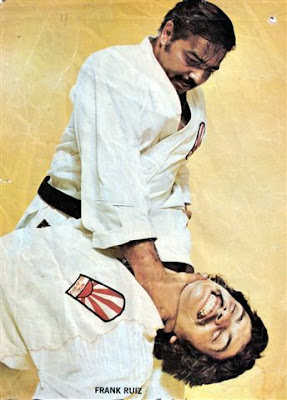 I would like to sent my respect to those who travel east and do the work of the Grand Architect of the Universe.
On this Father's Day I send a special greeting to all fathers who do the right thing by their families.
On this day in 1995 the martial arts world lost Hanshi Frank Ruiz 1934-1995, Founder of the Nisei Goju Ryu System. Here, we celebrate the fifteenth anniversary of his passing. We remember his life and contributions to the martial arts. He raised many children in the Martial Arts and I was one of them. I am very proud of that fact. I ask the martial arts world to have a moment of silence today and remember O'Sensei Frank Ruiz. He was a father to many of us.
I remember taking the above photo for the cover of Official Karate Magazine. It took a whole roll of film(32 photos) to take this photograph of Grand Master Frank Ruiz choking me. I remember the photographer, Joe Griffins telling Hanshi Ruiz , "Frank, your not making a mean enough face". That's when I said "All due respects, would you make a mean face, already". Remember the name, the man, the martial artist and the legend Frank Ruiz. Rest In Peace, O' Sensei Ruiz, you are missed by those of us you touched.
Posted by Wilfredo Roldan at 8:09 AM 2 comments: