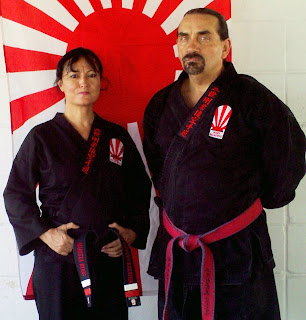 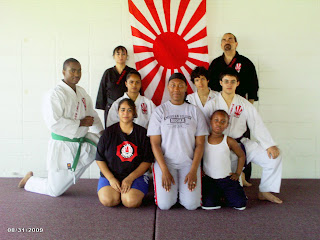 Before I start, I would like to send my best wishes to my brothers and sisters who travel east and do the work of the Grand Architect of the Universe.

After having discarded the BAD, I visited the U.S. Virgin Island of St Croix to, as they say, keep the GOOD. I left N.Y.C. at 8:55 AM and arrived on the Island about 6:00 PM. I was greeted, at the Airport, by second degree black belt, Sempai Maritza Rijos, the leader of New Nisei Goju Group in St. Croix. After settling in the place in which I stayed, we went right away to a public outdoor training area in Vialco Park.
While there for a couple hours, we reviewed the katas (forms) and kihon (Basic skills) not taught by the group's previous instructor. It's good to have a sincere representative, who is loyal to the system. Many masters say, in order to give life meaning you must do something that is greater than the yourself. We are very proud of the work she is doing to preserve the Nisei Goju Tradition set forth by its founder, the honorable Grand Master Frank Ruiz.
There, I taught a number of classes for the students. During these classes, not only did we review katas and the kihon, we went over class structure from warm up to cool down activities.
The class also cover ippon kumite(one step sparring exercises) and free style kumite(fighting). With two-two hour class in the morning and late afternoon on each of those days. The last class, we held on Sunday, lasted for about four hours with the review of the weekends work, as well as, review of some weapons(Bo, Sais, Katana) katas. Hope they enjoyed the feedback. I also got a chance to spar with some of the colored belts of the group, that was fun. I was also afforded the opportunity to watch Sempai Rijos work out that Saturday morning (7 to 10 AM), with the US Virgin Island's Olympic Tae Kwan Do under Coach Eugene Phipps, a competent Martial Artist and genuine person. To be part of any Olympic Team is an honor for the participant who represents their land in the games. Sempai Rijos: YOU GO GIRL!!!
All in all, I had a good trip and got a lot of work done.
May the Grand Architect of the Universe keep the New Nisei Group in the palm of his hand and keep them working, serving their community for Nisei Goju Ryu.
Photos Left to Right:
Sempai Maritza Rijos and Hanshi Roldan in front of the Nisei Battle Flag