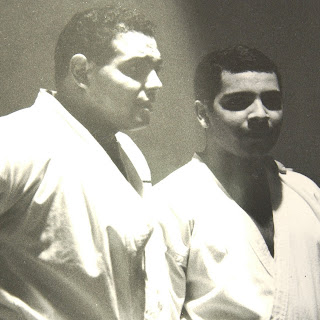 Salutations to those who travel east and do the work of the Grand Architect of the Universe.

Grand Master Frank Ruiz, Founder of Nisei Goju Ryu, July 2, 1934 - June 20th 1995. He would have been 66 years today.
He was credited for having assembled some of the many karate champions of the era under one battle flag, the Nisei Goju Ryu Organization. Grand Master Ruiz's history in the martial arts is well documented.
I was a brown belt when I first met the grand master. I was taken to the Master Skipper Ingham's mid-town Dojo by Master Owen Watson (my 1st teacher). Grand Master Ruiz looked at me and asked Master Watson, "What's he doing here?". Master Watson said, " for disciplinning!". I thought OH! Sh*t and some other choice words. What the hell did I do? I never found out. As soon as I stepped on the floor, the grand master called me over to do kumite (sparring).
The next thing I knew, my face and head were between his foot and the floor. That was an awesome experience. Thanks for touching our lives and for giving us the memories.
HAPPY BIRTHDAY GRAND MASTER RUIZ
Photo: Circa 1964- Martial arts demonstration on Staten Island, N.Y.C.
left to right: Grand Master Frank Ruiz and his first black belt, Master Carlos Serrano.
Posted by Wilfredo Roldan at 4:40 PM No comments: